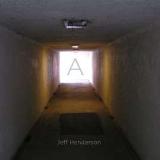 This is the last set of releases before I go to Korea. There are ten new albums available. Two of these releases are by Jeff Henderson. Jeff is an integral part of the New Zealand improvised music scene. He is one of the true master saxophonists; the founder of important venues for Wellington music; he has played with many great musicians such as Evan Parker and Han Bennink. Now postmoderncore is releasing Jeffs first two solo albums, A and Fuck You You Bureaucratic Fucks. Each of them is a recording of one of Jeffs live improvisations on baritone saxophone, and both of them are astounding pieces of music.