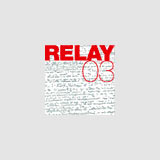 Tangent is playing with a bunch of mostly Korean artists at Relay 03 on Friday the 16th of September, in Seoul, Korea. It's at the iry cafe in the Hongik University area. There is a map showing the location of iry cafe on their website, but I had trouble getting there last time I went so email me if you want better directions.

Tangent should also be playing in Kobe, Japan in mid-November. More news to come. Also the second slab of sound podcast has been released, featuring Jeff Henderson, Evan Parker's Electro-Accoustic Ensemble, and the Peter Brotzmann Octet.