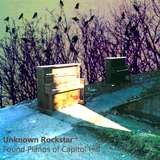 Unknown Rockstar has released a short album of piano pieces.

"I was walking through Capitol Hill, Seattle one weekend, and encountered an abandoned piano at the side of the road. I decided it needed a final piece of loving, so I recorded it in my phone. The next week I found the piano had been joined by a second, and both pianos had had their keyboards smashed. So I played the strings directly. Both pieces reflect the decay and misuse of the pianos, and the environment they spent a short time in before going to their final resting place."