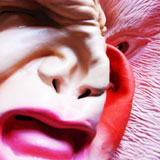 iiii Records have been releasing adventurous improv music from Aotearoa for a number of years now. Tangent was privileged to be invited to play with a stellar group of musicians, Snouts! and Mette Rasmussen for a set at the Audio Foundation on 19 January 2018. iiii Records described this as “a jagged set of cut-up, brain melting sclorp”.

Sadly the guitarist of Snouts!, Phill Dryson, is no longer with us. To commemorate the third anniversary of his passing, iiii Records have released Snouts! with Mette Rasmussen & Tangent as part of a rememberance for him.